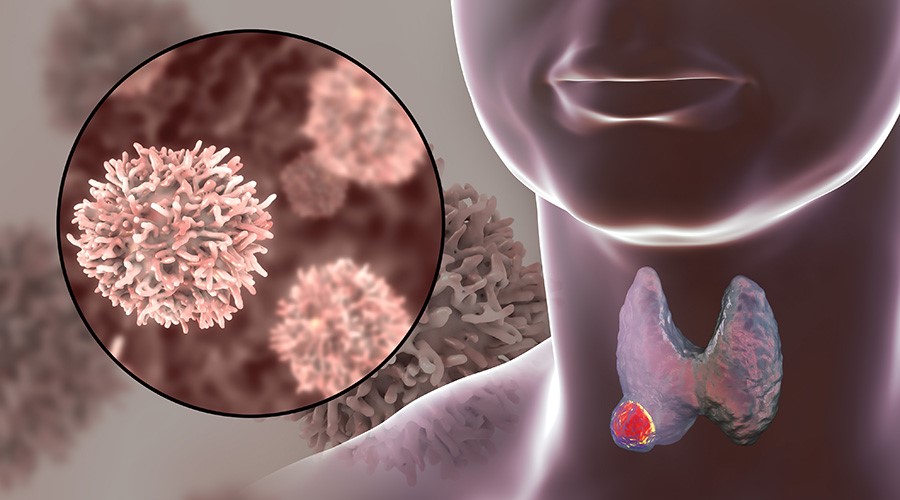 A 36-year-old woman with histological diagnosis of recurrent papillary carcinoma of the thyroid seen in the first quarter of 2020.

Initially evaluated in 2015 with an ultrasound scan following neck swelling which showed thyroid nodules and a biopsy confirmation.

She had both right and left right hemi-thyroidectomy in 2015 and in 2016 another scan revealed nodular lesions in both lobes of the thyroid for which she had complete thyroidectomy and a final histopathology in line with the diagnosis of thyroid cancer.

Further follow up in 2017 revealed residual thyroid tissue with no evidence of metastatic disease for which she had her second radio-ablation and was also placed on levothyroxine due to her hypothyroid state.

In 2020 she started having symptoms of neck pain, sore throat and headache. Symptoms were promptly evaluated with a whole-body PET CT scan.

She has been referred to nuclear medicine department for her to see a nuclear physician and for further radio iodide scan to further determine if there is residual thyroid tissue.

HOW COMMON IS THYROID CANCER?

According to the international Agency for Research on Cancer, thyroid cancer is the commonest cancer of the endocrine system, ranks ninth on the list of the most common cancers and represents Thyroid cancer is a malignancy of the thyroid gland, a butter-fly shaped gland that lies low in front of the neck.

The thyroid gland is an endocrine gland that secretes hormones which function throughout the body that are essential for metabolism, growth, regulation of body temperature amongst other critical roles.

There are several conditions that affect the thyroid gland of which thyroid cancer is one. Other conditions include thyroid nodules, hyperthyroidism, hypothyroidism, graves disease, thyroiditis to name a few.

Thyroid nodules which are lumps in the thyroid gland are important in the context of thyroid cancer. They are pretty common in the general population, and while majority of them are benign, about 5% of them detected by ultrasound scan are cancerous.

It is also more commonly seen in Females compared to males.

A higher incidence is seen in the Asian continent, where roughly half of cases are seen annually. Risk factors for thyroid carcinoma include family history of thyroid cancer, radiation exposure, female sex, Asian ancestry and history of goiter. 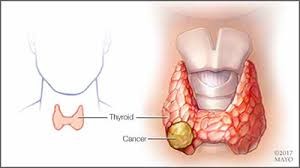 In Nigeria, studies done in Enugu, Ilorin and Lagos reported an incidence of 10%, 8.1% and 7% respectively.

Data from the National Cancer Institute’s Surveillance, Epidemiology, and End Results Program (SEER) show that approximately 1.3 percent of men and women will be diagnosed with thyroid cancer at some point during their lifetime with a median age of diagnosis at 51 years.

In the past 30 years, there has been a rise in the number of people diagnosed with thyroid cancer but this may be attributable to better imaging modalities and techniques.

Myths and Misconceptions about Cancer